The Tiger by John Vaillant

The Tiger: A True Story of Vengeance and Survival by John Vaillant

If I remember correctly,  I first heard about this on NPR.  It sounded chilling and fascinating.  I had read and enjoyed John Vaillant’s The Golden Spruce and looked forward to reading his newest book.

The Tiger is a mystery that involves an Amur tiger, known to most as the Siberian tiger,  and the people who live and struggle to survive in a remote forest on the border between Russia and China. It is a mix of regional history and natural history, with lots of cultural anthropology thrown in.

The story takes place in a region so marginal and wild that it defies categorization.  The people that live there are very like the land, struggling to survive the collapse of communism and the impact of open borders.

Because so much of life here is governed by a kind of whimsical rigidity – a combination of leftover Soviet bureaucracy and free market chaos – even simple interactions with officialdom can leave you feeling like you have wondered into an insane asylum.  To this day the Russian Far East is a place were neither political correctness nor eco-speak have penetrated, and patriotism is vigorous and impassioned…from page 22.

In Primorye, the seasons collide with equal intensity: winter can bring blizzards and paralysing cold, and summer will retaliate with typhoons and monsoon rains; three-quarters of the regions rainfall occurs during the summer.  This tendency towards extremes allows for unlikely juxtapositions and may explain why there is no satisfactory name for the region’s particular ecosystem – one that happens to coincide with the northern limit of the tigers pan-hemispheric range.  It could be that this region is not a region at all but a crossroads: many of the aboriginal tool that are now considered quintessentially North American – tipis, totem poles, bows and arrows, birch bark canoes, dog sleds, and kayak-style paddles – all passed through here first.  From page 23.

An Amur tiger is killing men.  A squad of  agents, whose job it is to solve crimes in the forest, especially those involving tigers, is charged with finding this animal and destroying  it.  These attacks do not appear to be random, this tiger is hunting down his victims, waiting patiently for them to appear.  They meet a grisly end.  Why?

When Russians wax eloquent about their homeland, they will often invoke Mother Russia, but Mother Russia is not the nation, ands She is certainly not the leadership; She is the Land.  The deep Russian bond to the earth – specifically, the soil – transcends all other affiliations with the exception, perhaps, of family.  Likewise, the forest and its creatures – plants and animals alike – have a significance that most of us in the West lost touch with generations ago.  From page 79.

Tigers are struggling to survive as a species.  Vaillant includes information on the decimation of tiger populations around the world and the efforts being made to save them.  He also includes many theories on how we humans have evolved right along side these and other large predators and how we may have developed the abilities to avoid being prey.

All of us, whether predator or prey, are opportunistic and creatures of habit.  Thus, if a leopard or a pack of hunting  hyenas failed enough times in its efforts to capture us, or was effectively intimidated, its menu preferences would shift accordingly – perhaps to baboons, where they remain today.  Once this new configuration was stabilized, the offspring of such “reformed” predators would presumably reflect these dietary changes.  There is good reason to suppose that, like the !Kung among lions, and the Udeghe among tigers, early man became an active, if cautious, cohabitant with these animals rather than their chronic victim.  From page 187.

Well-researched and wonderfully written, this is the kind of nonfiction book that I love.  Filled with history and nature,  the narrative form pulled me in like a great mystery.  Vaillant has made every effort to probe the minds of the people living in this remote area and the mind of the tiger who is hunting them.   I couldn’t put it down. 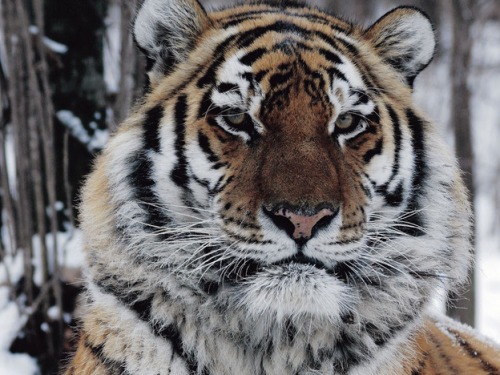 10 responses to “The Tiger by John Vaillant”