From my TBR pile.

I am taking part in a read-along organized by Mrs B, Arti andMeredith.  We are taking four months to read the book that won the Booker of Booker’s prize twice.    After reading Book One, I wanted to jump ahead and continue reading but decided to take the time to digest the first section.

In our den we have several wall hangings, presents from a friend who visited India and Nepal.  They are made up of pieces of cloth and imbedded with bits of mirrors.  When the sun hits them they bounce light all over the room. 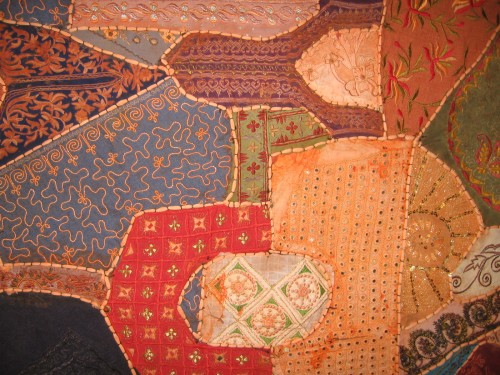 Midnight’s Children is a book made of words like bits of  mirror, reflecting the time before and after India gained independence from Britain and was partitioned into the states of India, West and East Pakistan.  The story is told by Saleem Sinai.  Each evening he writes his scattered thoughts and reads them to a woman he works with, Padma, who is illiterate and seems a bit grumpy and slow-witted.  It is Padma who helps bring Saleem’s thoughts into focus as he recalls his family history from the time before he was born.

Midnight’s Children reminds me of a twisted version of 1000 and One Nights, a comparison I’m sure the author is tired of,  and I love it.  Rushdie’s mix of tumbling language, history and magical realism is like looking through a kaleidoscope, where the image is split into a thousand parts but somehow comes together beautifully.

Book One covers the story of Saleem’s family up until the time of his birth, August 15th, 1947, which is also the exact time of the creation of the independent State of India.  By telling his story Saleem also tells of India’s struggles for independence, the bigotry between classes and religions and the lasting impact of the British Raj.  All this is told with grace,  humor and a burning coal of anger at its core.  Anger at the thick-headed greed of politicians, thieves and governments.

I find it difficult expressing  my admiration for Salman Rushdie’s abilities with language, with story-telling.  I can not wait to move on to Book Two.