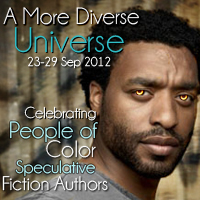 This amazing reading event has been organized by several bloggers, including Aarti and Natasha.  What started as a simple suggestion has turned into something that I hope will have wide impact across the book blogging community, introducing readers to speculative fiction written by people of color.

Borrowed from my public library.  This is the first novel I have read by Helen Oyeyemi.  Oyeyemi is  a young British author whose parents moved to London from Nigeria in the late 1980’s.    She won the Somerset Maugham Award for her third novel, White is for Witching.

Mr Fox is made up of short stories, letters, vignettes and folktales based around the relationships between St John Fox, his wife Daphne and his imaginary (or is she really/) muse, Mary Foxe.  The main theme come from fairy tales that feature women who have been ordered by men to follow certain rules and who, after breaking these restrictions, are murdered and dismembered.  Think of  Bluebeard, The Robber Bridegroom or Joseph Jacob’s Mr. Fox.

Mr Fox starts out lightly, with banter and teasing between St John Fox and his imaginary muse, but eventually Mary becomes angry at his need to kill off the women in his novels.  Does this distance him from truly engaging in his relationships, with his wife and with the world?

Eventually S.J. and Mary agree to write different kinds of stories, ones which delve deeper into what make up true connections.  We never know who writes what, but here is where  Oyeyemi’s abilities as a writer begin to shine.  Whether is is telling a story of Mary’s time as a nanny and the role her charge is forced to play as she grows up, or the tale of a Yoruba woman who falls in love with an Englishman and then grows bored with him, eventually rebuilding the relationship and finding herself renewed,  I was enthralled.  There is often violence woven in these stories, violence against women,  their struggle to be free of it, and their struggle to create.  And foxes, there are many foxes.

She’d thought she didn’t have any stories, but in fact she had too many.

She put down things she didn’t know she knew.  She wrote about a girl who babysat herself while both her parents worked and worked for not enough pay.  The girl didn’t answer the door or the telephone because no one was meant to know she babysat herself, and besides, it might be the Home Office, and then they’d all be deported.  So that she would not be scared, she pretended she was a spy and wrote secret spy notes on pink paper.  She posted the spy notes out of the living room window, she sent them spinning down onto the heads of passersby, who picked them up and didn’t understand them.  They’d look up, but the girl has disappeared from the window – no one was supposed to know she was there.  From pages 106/107

All the time Daphne Fox is floating around the edges of the novel, filmy and a bit bubble-headed.  It is when she begins to believe S.J. is having an affair with Mary that she becomes solid and real, and begins to think of a different life.  And Mary Foxe becomes real for her, Daphne gives her form and, in doing so, gives a new form to her own life.

Mr Fox is not an easy read.  It has no true shape, there are parts that drift, that don’t seem to connect to the whole, but by struggling through I found it all makes sense.  After a time I would like to read it again and I am definitely going to read more of Helen Oyeyemi’s work.  I am so grateful to the organizers of this event for bringing me to this author, and allowing me this opportunity to be part of an important blogging event.

For a brilliant discussions on diversity in fantasy and speculative fiction and please go here and here, and make sure to visit other blogs on this tour.  You can find a list here.

Eclectic Musings of a Renaissance Geek

Serenity is golden... But sometimes a few ripples are needed as proof of life.

Howdy! We're the largest independent bookstore in Texas. This is our blog.