Category Archives: Once Upon Time IV

Winner of the World Fantasy Award.

A wonderful fantasy novel by one of my favorite authors.  Maddy and Rogan are first cousins, members of a large group of extended families living in Yonkers in the 1960’s.  There is theater in their background, struggles within their families, and an opportunity to try out for parts in their school production of  Twelfth Night.

Maddy and Rogan are also very much in love. Illyria is a finely wrought tale of first love and blossoming sexuality between two young people in a “taboo” relationship.  Beneath it  are subtle layers of mystery and magic.

Elizabeth Hand is brilliant at creating atmosphere and tension using very direct, simple language and dialogue.  She evokes the dark side without the reader knowing it.  Suddenly you’re there, in a place so fey it is as if you stepped into a fairy ring, fallen down a rabbit hole or walked through that wardrobe into a land of snow and ice.   But Hand’s world is not Narnia.  There is no magic remedy for these two young people.

Illyria is a great introduction to a fine author.  If you would like to dig deeper I would suggest her short stories Saffron and Brimstone or the dark mystery/fantasy Generation Loss.

and a brief interview and playlist from

Filed under Fantasy, Once Upon Time IV, Young Adult

Lady Into Fox by David Garnett

Lady Into Fox by David Garnett

A short, mysterious novel first published in 1922.   This little book is a  fantasy, almost a folktale or myth.

Sylvia (nee Fox) and Richard Tebrick are a newly married young couple facing a bright future.  One day, while on a walk in the woods near their house Richard hears the call of the hunt and races up a hill to get a better view.  Sylvia hangs back and finally snatches her hand away.  Richard turns to her..

Where his wife had been a moment before was a small fox,  of a very bright red.  It looked at him very beseechingly, advanced towards him a pace or two, and he saw at once that his wife was looking at him from the animal’s eyes.  You may well think if he were aghast: and so maybe was his lade at finding herself in that shape, so they did nothing for a half an hour but stare at each other, he bewildered, she asking him with her eyes as if indeed she spoke to him: “What am I now become?  Have pity on me, husband, have pity on me for I am your wife.  From page 3.

Tebrick knows this fox is his wife, Sylvia knows she is a fox.  At first she does everything she can to keep her human qualities but eventually the fox takes over.  Richard sends everyone away from their home, spends pleasant hours with his vixen wife and worries constantly about her getting out into the wild, afraid of dogs and hunters.  He is at times appalled by her wildness and yet is filled with love for her.  Eventually he releases her into the woods, she finds a mate and has litter.  Richard grows to love them.  In the end he cannot save them.

What an odd little book.  I enjoyed it as a fantasy and had problems with the high romanticism and Richard’s sense of propriety.  I would have loved to hear more from Sylvia, as she grew into her wildness.

Stuck In A Book

For the tenth anniversary of the Sandman series Neil Gaiman, with help from Japanese artist Yoshitaka Amano,  wrote a tale combining  the mythology of Morpheus with elements of Japanese myth and folktales.  The story worked so well that readers and critics believed the story was ancient.

Now P. Craig Russell has used his artistry to produce the story in graphic form.

A young monk lives by himself in a small temple.  A fox and a badger make a wager.  Who ever can drive the monk from his home will call the place their own.  So begins this story of magic, demons and a love that was never meant to be. 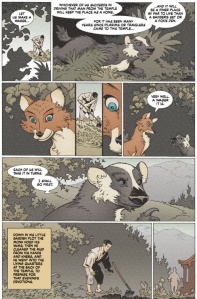 Russell’s artwork is a perfect match for this story, beautifully drawn and inked.  I was brought back into the world of the Dream King in a way I never expected.  Now I really have to dig out my original Sandman comics and read through them again.  Highly recommended for adult readers.

The Sorcerer’s House by Gene Wolfe

The Sorcerer’s House by Gene Wolfe

An epistolary novel, dark, weird and wonderful.  A perfect read for the Once Upon A Time IV challenge.

Baxter Dunn, recently released from prison, finds himself staying in a motel in a small town in the Midwest.

When Bax meets a real estate agent who tells him he is heir to an old, empty house his life becomes, well, unusual.   Things change quickly,  life is totally transformed.  Bax is confronted by strange creatures and events, becomes involved with odd, fey people.  His letters tell of magic, of different worlds, of sorcerers.  I had to keep reading, needing to know what happened.

Bax is an oddly compelling character.  Wolfe has created a  mundane world that becomes creepier until, by the end, it feels like a weird, twisted dream.  This book reads so smoothly I was surprised by how quickly it was over and I wanted to turn around and read it again.  Read it,  you’ll love it.

One final note.  I had to grin when I first opened the book, found the dedication page, and read:  To Neil Gaiman, the best of writers and the best of friends.

The Last Unicorn is a marvel.  If you love fantasy, if you love magic, read this book.  Written 40 years ago, it is a classic that has stood the test of time.

A unicorn lives in a wood all alone.  Hearing a conversation between two hunters she becomes curious and decides to search for others of her kind.  This quest leads to meetings with villains, monsters and an unlikely magician named Schmendrick.  There are battles and losses, witches and kings.  The only way to give you a taste of this morsal is to let you read.

Sometimes she thought if men no longer know what they are looking at, there may well be unicorns in the world yet, unknown and glad of it.  But she knew beyond both hope and vanity that men had changed, and the world with them, because the unicorns were gone.  Yet she went on along the hard road, although each day she wished a little more that she had not left her forest.  From page 11.

So they fled across the night together, step by step, the tall man in black and the horned white beast.  The magician crept as close to the unicorn’s light as he dared, for beyond it moved hungry shadows, the shadows of the sounds the harpy made as she destroyed the little there was to destroy of the Midnight Carnival…From page 54.

And far away on the other side of the unicorn, Schmendrick the magician stalked in silence.  His black cloak was sprouting holes, coming undone, and so was he.  The rain that renewed Molly did not fall on him, and he seemed every more parched and deserted, like the land itself.   The unicorn could not heal him.  A touch of her horn could have brought him back from death, but over despair she had no power, nor magic that had come and gone.  from page 106.

Beagle is an accomplished story-teller.  Using clear crystal-like language he brings this classic tale to life.  The Last Unicorn is  filled with scenes of ethereal beauty, terror and very human foibles.  It is often laugh out loud funny.  It is a book I would recommend to anyone interested in the genre, fans and new comers alike.

Have you read and reviewed this book?  Please leave a comment so I can add a link to your blog.