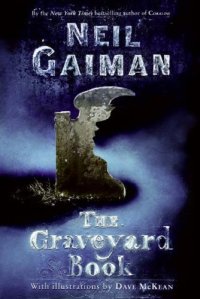 The Graveyard Book by Neil Gaiman

Organized by Carl V, Week 2 of our read-along covers Chapters 4 thru 6 and includes an Interlude.  Please visit Carl’s blog for links to other posts about this magical book.

One of the best things about The Graveyard Book is that it is made up of many stories, stories of Nobody Owen, growing up, protected and loved by ghosts and other beings that pass between worlds.

We learn a bit more about his guardian Silas, and Bod learns a bit more about the place where he lives. He meets the ghost of a lovely young witch and tries to do something kind for her.  Leaving the Graveyard for the first time since his arrival he runs into trouble.  Maybe the world of the living, outside of the Graveyard fence, is not the best place for a live boy with a kind heart.  But on rare occasions ghosts visit there, and sometimes the living dance with the dead.

They took hands, the living with the dead, and they began to dance.  Bod saw Mother Slaughter dancing with the man in the turban, while the businessman was dancing with Louisa Bartleby.  Mistress Owens smiled at Bod as she took the hand of the old newspaper seller, and Mr. Owens reached out and took the hand of a small girl as if she had been waiting to dance with him her whole life.  Then Bod stopped looking because someone’s hand closed around his, and the dance began.
Liza Hempstock grinned at him.  “This is fine,” she said, as they began to tread the steps of the dance together.
Then she sand, to the tune of the dance,
“Step and turn, and walk and stay,
Now we dance the Macabray.”  From page 159.

During the interlude we discover that the Man Jack needs to finish what he started.

Bod learns to fade and to haunt.  And craving knowledge of the world of the living, he goes to school.

Gaiman has a way about him.  A way of mixing life and death and giving grace to both.  Bod’s story is lovely and sad and joyful all at the same time, and oh so gentle, even at it’s most horrific.    I don’t know how this author does it.  It is a mystery, eerie and beautiful.

Dewey’s 24 Hour Read-A-Thon starts this Saturday, October 22 at Noon GTM.  Even though I am not able to be part of this event I wanted to give a big hand to all the organizers and to the 341 readers who have signed up.  There is even a Facebook group!

I hope to be able to visit some blogs Saturday evening but if not, or if I don’t make it to your corner of the internets, Good Luck and Happy Reading!

Next Saturday, April 10th, is Dewey’s 24 Read-a-Thon.  Not sure what all the excitement is about?  Follow the link and find out.  As I am not sure of my plans for the day I will be cheer-leading in the early morning and the evening.  Why don’t you join me?

I managed to stay awake for another 2 hours and then just couldn’t keep my eyes open!  I want to thank Trish, Wordlily, Nymeth and Eva for organizing this event, all the wonderful people who ran mini-challenges and all the fabulous cheer leaders.  It was great fun!

The Bride’s Farewell by Meg Rosoff.  Another favorite, will review later.

The House of Paper by Carlos Maria Dominquez.  A lovely, quirky little book about books.

The Facts in the Case of the Departure of Miss Finch.  A graphic novel by Neil Gaiman, Michael Zulli and Todd Klein.

Wee Gillis by Munro Leaf, illustrated by Robert Lawson. A children’s book by the creator of  The Story of Ferdinand.

Ethel & Ernest by Raymond Brigg’s.  A lovely graphic novel which I will read again before returning it to the library.

The Rabbi’s Cat by Joann Sfar.  Another graphic novel, beautifully drawn and inked and quite funny.

My Abandonment by Peter Rock.  I got 38 pages in and then drifted off to sleep.

How I feel about the Read-a-thon:  This was great fun.  I’m am really glad I had a large selection of books on my Read-a-thon pile, including the graphic novels.  They added many pages to my total count.  There were several books I picked up to read and just couldn’t get into and it was a relief to have many other choices.  Until next time, keep reading!

It’s getting late and my eyes are feeling tired.  Not sure how much longer I’ll be able to keep reading but it has been great fun so far.  I have not spent much time on the computer, will try and check in on bloggers a bit later or in the morning.

The Bride’s Farewell by Meg Rosoff.  Another favorite, will review later.

The House of Paper by Carlos Maria Dominquez.  A lovely, quirky little book about books.

The Facts in the Case of the Departure of Miss Finch.  A graphic novel by Neil Gaiman, Michael Zulli and Todd Klein.

Wee Gillis by Munro Leaf, illustrated by Robert Lawson. A children’s book by the creator of  The Story of Ferdinand.

Audio books: Hitchhiker’ Guide to The Galaxy by Douglas Adams, read by Stephen Fry.  I listened to 4 chapters while doing a  things around the house.  This is quite well read and, as always, very funny.

How I’m feeling: My eyes are tired and I’m not sure what to read next.  Maybe a mystery to keep me up a while longer!

Here is my first update!  Woke up at sixish and read for an hour and a half  then got ready for my workshop. Out of the house at 9, walked to the workshop and spent 3 hours doing my favorite movement practice.  Stopped at the market for some Izzy grapefruit soda on the way home, had a yummy sandwich and fruit for lunch and then back to the couch for more reading!

I have just started The Bride’s Farewell by Meg Rosoff.

How I’m feeling:  Great!  I’m afraid I may have to take a nap if I’m going to try and stay upreal late:)

Dewey’s 24 Hour Read-a-Thon is about to begin!  Created by Dewey, a beloved book blogger who died in  November 2008, the Read-a-Thon is an event that creates excitement all across the book blogging community. The first Read-a-Thon, in October 2007, had 37 participants.  This one, starting tomorrow at 5 AM Pacific time, has 349 people signed up to read and nearly 100 people signed up to cheer on the readers.  You can read about the history of the Read-a-Thon here, and if you would like to join in you can do that here.

I have a workshop to attend in the late morning but plan to start reading when I wake up and will continue when I can throughout the day. I will take walks, post updates and visit other bloggers when I need a break.  I have created a Read-a-Thon folder on GoogleReader so if you are participating please leave a comment so I can be sure to include your blog.

I have gathered a  great stack of  books from the library, have another stack of  books on my To Be Read pile, have plenty of snacks, both healthy and otherwise, fizzy water, fruit juice,chocolate, and a loving husband who is willing to pick up Pad Thai from our favorite restaurant if the need arises.  What more could a person ask for?

The Curious Case of Benjamin Button: A Graphic Novel by Nunzio DeFillippis

The Facts in the Case of the Departure of Miss Finch by Neil Gaiman, Michael Zulli and Todd Klein

Happy Sunday Salon.  It has been a slow reading week for me.  I think I’m fighting off the cold that is working its way through school.  I did finish The Book of Secrets by M.G. Vassanji and should have a review up today or tomorrow.

Next Saturday, October 24th,  is Dewey’s 24 Hour Read-a-Thon, and even though I have a workshop to attend during the day I decided that I would join in and read.  If you are at all interested please visit the site and learn all about this exciting event.

So, after cheer-leading for the last read-a-thon and finding out all about different reader’s strategies,  I decided that, along with the books I am currently reading, Kristin Lavransdatter by Sigred Undset, and  Let The Great World Spin by Colum McCann, I would stockpile a collection of books from the  library in hopes that one or more would keep me reading for as long as I can.  I think I went a bit overboard… 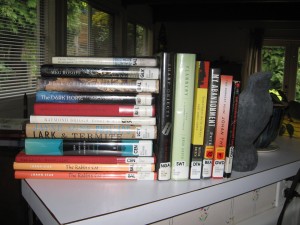 The House of Paper by Carlos Maria Dominguez*

The Book of Flying by Keith Miller*

Her Fearful Symmetry by  Audrey Niffenegger

My Abandonment by Peter Rock

The Darkest Room by Johan Theorin

The Bride’s Farewell by Meg Rosoff

The Wolves of Willoughby Chase by Joan Aiken

A Episode of Sparrows by Rumer Godden

The Dark Horse by Marcus Sedgwick

Flannery: a life of Flannery O’Connor by Brad Gooch

On my MP3 Player:

The 39 Steps by John Buchan

If these don’t keep me engaged, I have several piles of to-be-read books lying about the house.

*These two books were suggested by Chris on his fabulous Surprise Vlog.  Thank you, Chris.  They both look wonderful.

Eclectic Musings of a Renaissance Geek